The Donald page of records

Some remarkable ways in which people have travelled my route

The following are self-reported records (let me know of any others, or if you break any of these!)

Matt Kerr and Stuart Wadsworth  June 2016, at lightning pace. They left London at 637pm, taking just 3h9min to reach Newhaven (with one puncture). The ferry was a five-hour one and they left Dieppe at 528am and reached the Eiffel Tower at 105pm, stopping only for two more punctures and a well-earned cake at a patisserie. They averaged  18mph in 10h20 moving time.

Matt and Stuart's feat is all the more impressive as they kept to the cycleways on my route rather than faster road alternatives. (But if you want to challenge the record on the same terms, use their track from Strava, which does include a slightly faster on-road alternative after Gournay which I included as an option  before the disused railway opened along that stretch.)

Dominic Irvine . Dominic  has competed in various iron man challenges, and in 2015 cycled Lands End to John o'Groats on a tandem in 45 hours, breaking a world record that had stood for 50 years. He  uses my  route for some gentle training on his single-speed bike! In May 2013, he  rode London to Paris via the night ferry,  turned straight round and took the next night's ferry back. He did admit that  his legs hurt  after his return...

Other people have done London-Paris faster than this, but not along my route. In July 2017 , Richard Owen did London-Paris-London in just over 39 hours by using night ferries on successive nights. He took a direct road route to Paris cutting off over 20 miles in each direction. Anyone wanting to beat Dominic Irvine's 45 hours L2P2L using my route would need to do Dieppe-Paris-Dieppe in the approximaetely 19 hours between arrival and departure of night ferries (which Dominic did using my route). The overall time will then depend on the UK legs. Dominic was not trying to set a record, and Richard's overall time was nearly six hours faster because of tighter timing from London to Newhaven and back.

Some other London to Paris sub-24 riders

- Steve Foster and Pete Hurry (well-named!), 18h30 in June 2016. Steve definitely gets a "best for age" award having been born in the same year as me (the one when Sweden hosted the World Cup) - allowing me still to dream of breaking records...!

15 minutes inside the 24 hours, despite being

plagued by punctures, and some torrential rain)

who easily hold the record for Most money raised for a charity:

an incredible £225,000 for the Duchenne Children's Trust

just 3½ days to cycle 210  miles from Kingston to Paris, with a remarkable 80 miles in freezing temperatures on the first day. They raised money for Help for Heroes.

cycled with his young friend Walter Soreau (75, right) from Brighton to Paris. Unlike some speed fiends, they took their time to enjoy the food, drink and countryside along this route, over five days, as related in Wally's excellent account.


Greatest age range and  most generations in one group

They did London to Paris in an impressive 3 days via the overnight ferry. Will the concept of a family holiday ever be the same again?

Here's Robin's story of the trip

45 riders from Parmoor (near Henley) to Paris, led by Rob Hamilton, June 2012, raising an amazing £45,000 for 1morechild, a Ugandan charity for street children and the origin of a company offering to support you to ride in short hops across the world!

Largest number of wheels on one contraption

FIVE
Neil Sparey, with Bruce, Robbie and Webby on their "Pentacycle".

In March 2013 they pedalled it back from Paris to support the Lily Foundation, which supports research into Mitachondrial Disease. Everything was going great until it started snowing. Arriving in London, they showed their delight with this contraption by putting it up for sale on Ebay (anyone interested?)...

THREE - No, not the Goodies, but Andrew Stanfield, Andrew McKechanie and Sarah Wright, on their "triplet", raising money for the Patrick Wild Centre, where they work on research into autism. A video of their trip is here.

About 3 metres (tandem plus 55kg trailer) Nigel Thomas and Frances Valdes,  Brighton-Paris and back, Jubilee weekend 2012 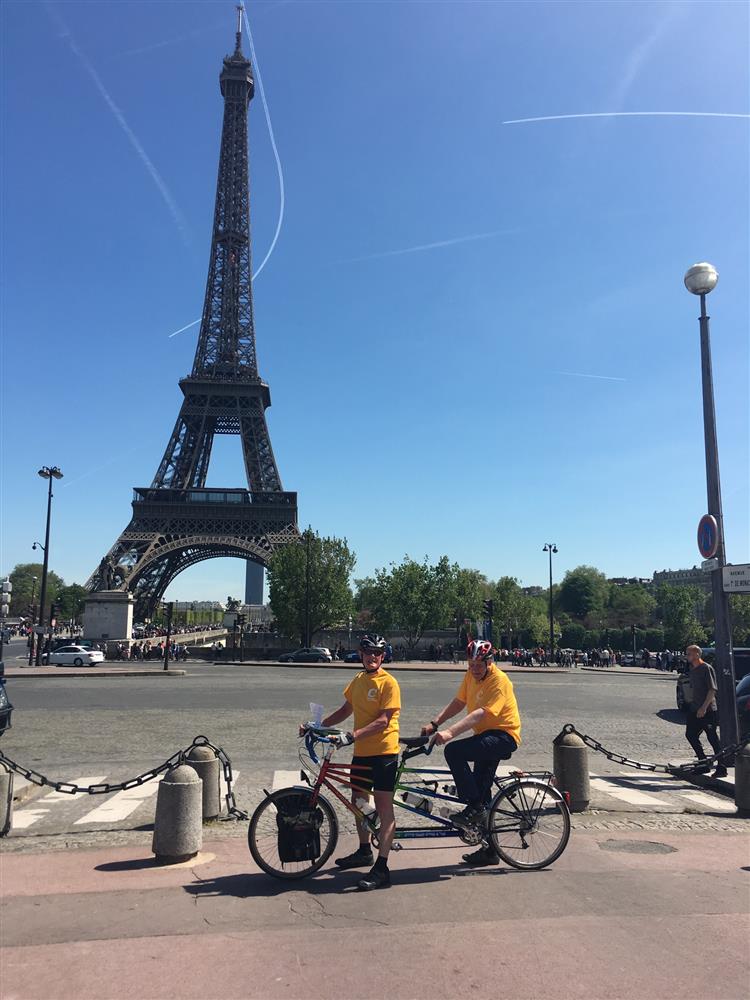 Mulholland, aged 80 and blind, on the back of a tandem skippered by 70-year-old

Bob Harper in May 2016. They rode from Brighton to Paris and raised over

one way to celebrate an 80th birthday!

First and most internationalised riders of the route

Guildford to Paris, via Downs Link, Brighton and Dieppe- the pioneers